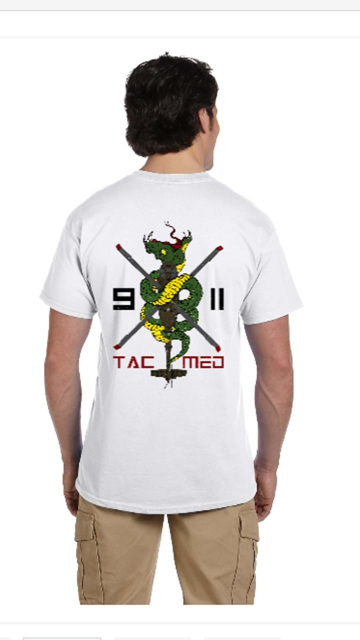 Unless specified for Flight or Other Special Jobs then the shirt will be 100% Cotton or other FR material.

​BACK: 911 Tactical Medicine "Rod of Asclepius" Helo and Snake

The snake and staff are known as the "Rod of Asclepius". Asclepius is the Greek god of Medicine and Healing, hence the symbolism. Snakes then symbolized rejuvenation. Many mistakenly think that the Caduceus (a short staff with two snakes and a winged top) is the symbol of medicine, or call the Asclepius staff a caduceus. The Caduceus is the symbol or Hermes (Roman = Mercury) the messenger and symbolizes travel, commerce, etc. While this may not be all of it, some of the confusion traces back to around 1920 when the US Army mistakenly used the Caduceus for their medical personnel.

It is relatively common, especially in the United States, to find the caduceus, with its two snakes and wings, used as a symbol of medicine instead of the Rod of Asclepius, with only a single snake. This usage was popularised largely as a result of the adoption of the caduceus as its insignia by the U.S. Army Medical Corps in 1902 at the insistence of a single officer (though there are conflicting claims as to whether this was Capt. Frederick P. Reynolds or Col. John R. van Hoff)