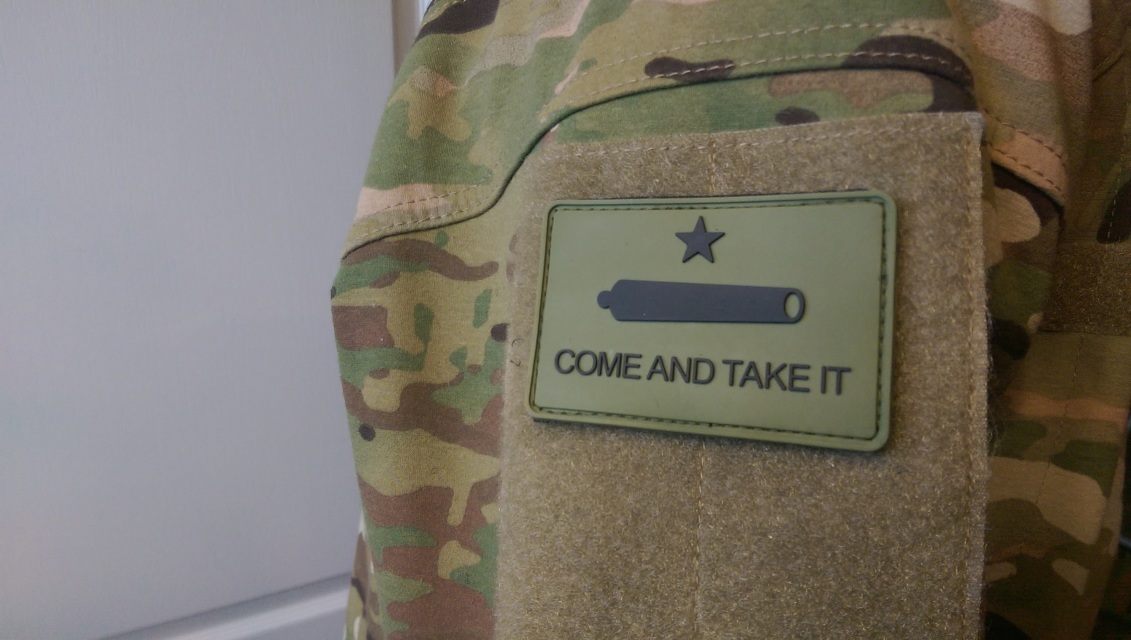 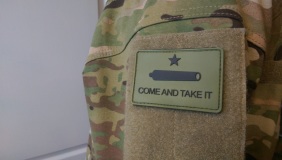 COME AND TAKE IT

GONZALES "COME AND TAKE IT" CANNON. The Gonzales cannon of “Come and Take It” fame was a Spanish-made, bronze artillery piece of six-pound caliber. The gun was the object of contention in late September and early October 1835 between a Mexican military detachment from Bexar and American colonists who settled in Texas. The disagreement produced the battle of Gonzales, considered to be the first battle of the Texas Revolution.

On January 1, 1831, Green DeWitt initiated the new year by writing Ramón Músquiz, the political chief of Bexar, asking him to make arrangements for a cannon to be furnished to the Gonzales colonists for protection against hostile Indians. On March 10, 1831, after some delay, James Tumlinson, Jr., a DeWitt colonist at Bexar, received one bronze cannon to be turned over to Green DeWitt at Gonzales, with a stipulation that it was to be returned to Mexican authorities upon request. The fact that the gun was not carriage mounted until about September 28, 1835, suggests that in 1831 it was probably swivel mounted in one of the two blockhouses that had been constructed at Gonzales in 1827. Thus mounted it would have served as a visual deterrent to hostile Indians.

The Gonzales cannon is was next mentioned in September 1835, when Col. Domingo de Ugartechea, the military commander at Bexar, sent Corporal Casimiro De León and five soldiers of the Second Flying Company of San Carlos de Parras to retrieve the cannon. The Gonzales colonists notified Ugartechea they were keeping the gun and took the soldiers prisoner. The cannon was then buried in George W. Davis's peach orchard and couriers were sent to the settlements on the Colorado River to obtain armed assistance. Ugartechea responded by sending 100 troops under Lt. Francisco de Castañeda to make a more serious request for the return of the gun. On September 29, Capt. Robert M. Coleman arrived at Gonzales with a militia company of thirty mounted Indian fighters. The gun was retrieved from its shallow grave, taken to John Sowell's blacksmith shop, and mounted on the fore-wheels of Albert Martin’s cotton wagon. This cannon was fired twice in the third skirmish of the battle on October 2.

The "Come and Take It" cannon of the Battle of Gonzales (The cannon is the real thing, the carriage a reproduction) on display at the Gonzales Memorial Museum, Gonzales, Texas, United States. Courtesy of Larry D. Moore Photography. Image available on the Internet and included in accordance with Title 17 U.S.C. Section 107.

Replica of the Come and Take It Flag Hanging at the Texas State Capitol. Image available on the Internet and included in accordance with Title 17 U.S.C. Section 107.

The name "Come and Take It" refers to the motto adopted by the Texian rebels. A few days prior to the battle, two young ladies from Gonzales, Caroline Zumwalt and Eveline DeWitt, hastily prepared a flag with an image of a cannon and the words “Come and Take It”. This flag was raised above the Gonzales cannon during the battle on October 2, and later carried with the gun toward San Antonio, but was soon lost without a trace.

After organization of the Texian "Army of the People" under Gen. Stephen F. Austin at Gonzales, the cannon was assigned to Capt. James C. Neill's artillery company, hauled to San Antonio and used during the Siege of Bexar. After the capture of Bexar in December 1835, the cannon remained at the Alamo, where it was one of twenty-one large artillery pieces commandeered by the Mexican army upon the recapture of the Alamo on March 6, 1836.

There was a second cannon at the Battle of Gonzales, a much smaller iron gun called an esmeril, the smallest of Spanish cannons of the first class, of one-pounder caliber or less. Several of these were recorded in Texas during Spanish colonial era. Although never mentioned in American accounts of the battle, Lt. Castaneda’s two reports of the battle, dated October 2nd and 4th, clearly indicate that two cannons were used in the battle. The esmeril was the first one fired in the second skirmish. This type of small cannon was typically swivel-mounted or carried on the back of a mule during frontier campaigns. Two other Mexican accounts mention both cannons in Gonzales. Noah Smithwick repaired the esmeril’s touch hole after the battle and it was mounted on a crude carriage made with sawn cross sections of a tree trunk. Both guns left Gonzales with the Texian army headed for San Antonio, but the small gun’s carriage failed and it was abandoned at Sandies Creek. A major flood in 1936 uncovered the small gun leading to its rediscovery; it is now on display in the Gonzales Memorial Museum.

The bronze Gonzales cannon was buried with other captured Texan cannons inside the Alamo compound. It was unearthed by Samuel Maverick in 1852, and sent to New York by his widow Mary Maverick in 1874, where it was recast into a bell that hangs in the belfry of St. Mark’s Episcopal Church in San Antonio.